Please download the notice to view it. This is the same notice that was included in resident water bills and published in the newspaper. This incident is not an emergency situation. For additional questions, please contact town hall at (863) 438-8330.

Please find the link below for bus route information in Dundee:

The Town of Dundee routinely monitors for possible contaminants in our drinking water, in accordance with Federal and State laws, rules, and regulations.  Except where indicated otherwise, this report is based on the results of our monitoring for the period of January 1 to December 31, 2015.  Data obtained before January 1, 2015, and presented in this report are from the most recent testing done in accordance with the laws, rules, and regulations. As water travels over the land or underground it can pick up substances or contaminants such as microbes, inorganic and organic chemicals, and radioactive substances. It also dissolves naturally-occurring minerals and, in some cases, can pick up substances resulting from the presence of animals or human activity. All drinking water, including bottled drinking water, may be reasonably expected to contain at least small amounts of some contaminants. It’s important to remember that the presence of these contaminants does not necessarily pose a health risk. Some people may be more vulnerable to contaminants in drinking water than the general population. Immune-compromised persons such as persons with cancer undergoing chemotherapy, persons who have undergone organ transplants, people with HIV/AIDS or other immune system disorders, some elderly, and infants can be particularly at risk from infections. These people should seek advice about drinking water from their health care providers. EPA/CDC guidelines on appropriate means to lessen the risk of infection by cryptosporidium and other microbiological contaminants are available from the Safe Drinking Water Hotline (800)-426-4791.

With property fraud on the rise, it’s more important than ever to monitor your records. 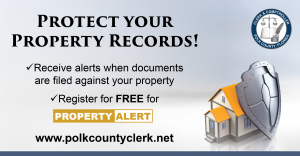