History is the heart of every great community and Dundee, Florida, is rich in history and heritage. The green, rolling hills, sparkling lakes, and sunshine brought Dundee its first settlers.

In 1910, a Mr. Menzie from Dundee, Scotland, decreed the tiny settlement here should be called Dundee after his former home. He also named one of Dundee’s many lakes, Lake Menzie. Soon after, land speculators and developers realized Dundee’s many attributes. In 1911, with the arrival of the Atlantic Coast Line Railroad’s new Haines City to Sebring branch and the construction of the Dundee railroad station, speculators had a means to bring prospective settlers to get a firsthand view of this beautiful section of Florida. One of the first to recognize Dundee’s potential was William W. Shepard of Minneapolis who, with his associates, purchased some 14,000 acres of land along the Scenic Ridge from Lake Hamilton to Mountain Lake including much of present day Dundee. His company, The Highlands Development Co., had two goals: developing citrus groves and selling house lots. The availability of reliable transportation enabled them to accomplish their goal of selling house lots. The Highlands Development Co. ran special trains to Dundee bringing hundreds of potential settlers, and those who purchased land were refunded their rail fares.

The historic Dundee Train Depot still stands. Recently registered as a National Historic Landmark, the station, a 66-by-26 feet building built primarily of Florida pine and cypress, was started on November 2, 1911, and completed just after the first of the next year. Shortly thereafter, Mr. Shepard’s organization started their advertising campaign through the mid-west and expectant buyers started to arrive at the new Dundee station.

The Probst and Clark families from Minneapolis were among the first who arrived with their household goods and live stock. They came, not in one of the many passenger cars to bring later arrivals, but in their private (if you don’t count the animals), side-door pullman car. They chose a beautiful tract of land on the east side of Lake Annie and started building their new home.

To accommodate the influx of people, a large tent was erected near the station and was soon replaced by the Highlands Hotel, a two-story structure with broad porches overlooking Dell Lake and the 900-acre citrus nursery and groves of the Glen St. Mary Nursery Company. In the years to follow, citrus trees were to crown the hills of Dundee; but before citrus became king, the Dundee area had many stands of tall Southern pine.

The earliest enterprises in what was to become Dundee exploited its resource of Southern pines. The Mixon Sawmill, which furnished some of the timber for the new depot, and Rayburn’s Turpentine Distillery flourished briefly, but the pines were soon gone and so were they. It was then that the citrus industry took over. The W. C. Lee Packing House, on the shore of Crystal Lake, opened to process fruit. In 1924, Dundee Citrus Growers Association purchased the packing house and, in 1929, a new packing house was constructed next to the railroad station.

With the advent of the railroad the town grew rapidly. J. P. Lyle, an early resident who helped lay out many of the streets and lots for the Highlands Co., settled here with his bride. They lived in a tent in the shade of a big camphor tree that still stands beside the new community center. It was there that their first child, Louise, was born, the first recorded birth in Dundee.

Hours of Operation: Tuesdays, Thursdays, and Saturdays from 10am-2pm 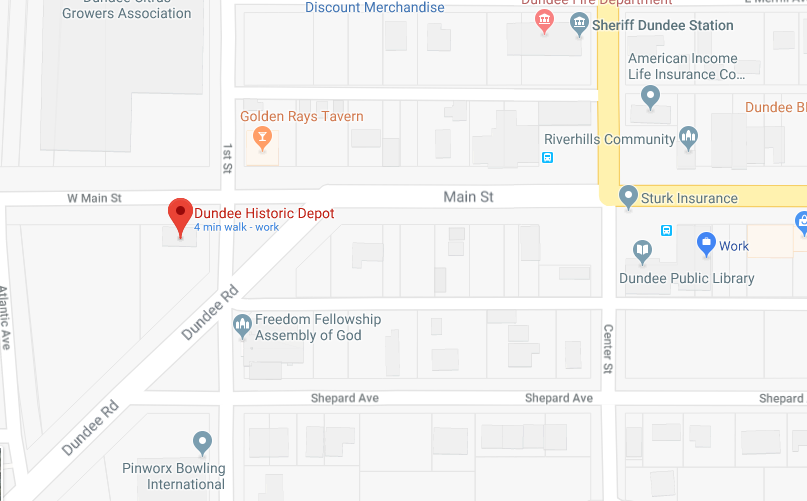